The new reasons you fail the CFA exams

The CFA ® exams have never been easy to pass, but as many of you reading this site will be aware, they have been harder to pass than ever since the pandemic.

Today's results for November's CFA Level III suggest the unrelenting decline in the pass rate has at least been arrested. In August 2021, level III passes dropped to their lowest level in the exam's history - a "savage" 42% last August. Today they are at least a little higher, having crept up to 43%. Nonetheless, it's worth remembering that as recently as 2019, Level III pass rates of 56% were the norm.

CFA Institute isn't impervious to the anguish of the tens of thousands people who take its exams only to repeatedly fail. In a video released last September, Chris Wiese, the senior head of examination development, said the Institute has spent a lot of time trying to understand why recent candidates have been failing at a higher rate than their predecessors. In doing so, Wiese said a new reason has been added to the retinue of other reasons why people don't succeed CFA exams: delays.

Exam cancellations were a key reason for the lower pass rate last year, said Wiese, showing the chart below: "Scores for candidates whose exams had been deferred at least one time significantly impacted the overall pass rate."

Wiese said candidates' had delayed exams themselves, or had sittings postponed due to the pandemic. "We know that our candidates are tired and stressed whether from professional obligations, personal situations, or just having exam day hanging over their heads."

If you want to pass the CFA exams, you can't presume that the studying you did for a deferred exam a few months' earlier was enough, said Wiese. "“Treat your upcoming exam administration as much as possible like it’s your first. Don’t rely on retention of material that you studied many months ago and don’t underestimate how much a good thorough review in the weeks leading up to exam day can help." 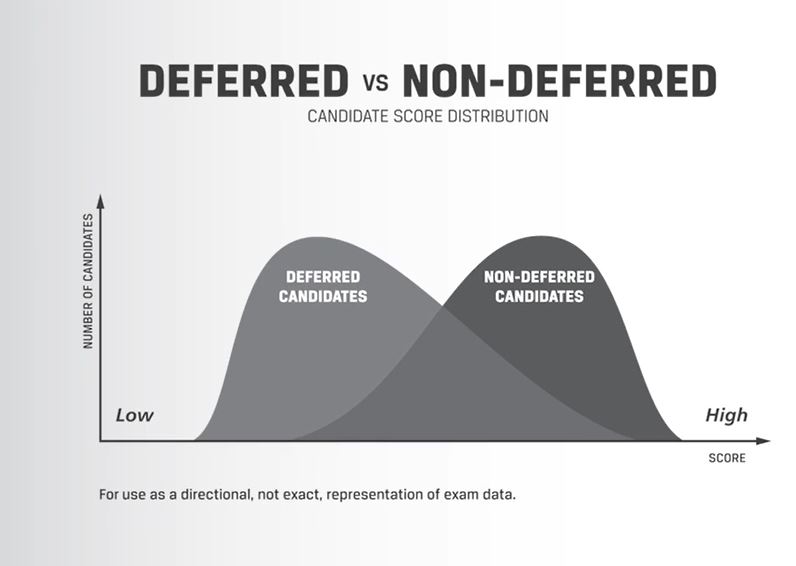 Speaking today in relation to November 2021's near-record low pass rate, Peg Jobst, managing director for credentialing at CFA Institute added that it's not just about deferrals, it also helps to sit all three exams in quick succession. “Our research shows that the longer the gap between sitting for exams, the lower the chances for success. This has often been beyond anyone’s control,” says Jobst.

Some posts on Reddit's CFA results thread bear this out. "My journey was shorter than most. I took the three exams in 11 months. Dec 2020 L1, May 2021 L2, Nov 2021," says one successful Level III candidate. "Last year was insane. I took and passed Level II in May and then went straight into Level III with only a few months to prepare. Happy to report that it’s over and that I passed!"

These reasons for failing the CFA exams are supplementary to the many reasons candidates failed historically, which were as follows:

If anything, therefore, 300 hours may not be enough. Past CFA exam candidates say they only passed when they increased their study time considerably. "The first time I studied about 300 hours. The second time I increased it to around 400," says one candidate who was successful on round two. "I spent more than 800 hours studying and I'm not sure I can do better next time," says another candidate who failed.

Naturally, there are always people who claim to have studied less. One candidate told us he passed CFA Level I after studying for just 30 hours and using half the allocated time in the exam. "It's not hard if you're decent at math," he says.

You fail the CFA exams if you have no exam strategy

The CFA Institute doesn't release the passing scores for its exams (which vary in any case), but the pass score for CFA Level I is thought to be around 70%. One candidate claimed to have a strategy for answering the questions in Level I which involved focusing first on the 50% of questions you can definitely answer correctly. If you can nail 50% of the answers first, he says you'll create a strong enough foundation for achieving the pass grade.

The CFA's own study materials are a necessary but not sufficient source of information for passing the institute's exams. "The CFA's books are just too much information," says one candidate. "Something like Schweser condenses things and makes it all more palatable."

You fail the CFA exams if you have a life

Do you have a family? A job? A hobby? Are you prepared to put all of this aside while you study for some fiendishly difficult exams which you may not pass. If the answer is no, you might not want to bother. "Is the juice worth the squeeze?" says one candidate. "For some it is, for others not so much."

The CFA is at least open about the pressure the exams will put upon your family life. "Tell family, friends, and colleagues about your efforts and what the next few months will be like for you," they say on their website. "That will help you focus on your studies without guilt, or at least without having to explain over and over."

Anecdotally, it gets harder to handle the demands of the CFA the older you get. When you step into the exam hall, CFA candidates say you'll see hardly anyone over 40.

“The CFA exams are becoming a rite of passage for people in their 20s who have nothing going on,”" one 40-something ex-analyst told us. “Once you have a wife and family, a house and kids, there are just better ways of spending your time.”

So you thought the quantitative questions would be the hardest? Wrong. Some of the hardest topics in the syllabus are actually fixed income, derivatives and portfolio management.

300 hours is a lot of life. You're not going to pass - especially if you're also working full time - unless you devise a proper revision plan. "The quantity of information to be mastered requires a balanced and persistent approach," says the CFA itself.

Is it possible to work put in 12-13 hours of study time per week if you're also putting in 100 hour weeks in a bank? Not really. "It is useless to try to pass any CFA in six months if you're sleeping three hours a night and working 14 hours in M&A, weekends included," says one banker who passed CFA Level I after setting aside 18 months to study.

One seasoned fund of funds analyst told us she didn't take the CFA because it wasn't mandatory when she was a junior, but that she wouldn't have had time anyway: "I was working 14 hour days."

The closer you get to the exam, the more time you should be spending on practice questions. Mock tests under timed conditions are essential for passing the CFA. Find out what you don't know, learn it, and test yourself again. “This is the best way of finding out how good you are and what you still need to work on. It will also give you confidence before the big day,” one candidate told us.

"My only piece of advice is to practice the exams under timed conditions," says another Charterholder who passed all three exams first time.

You fail the CFA exams because you're a 'quitter'

Most people fail the CFA exams. If you're trying to pass all three and to become a CFA Charterholder, a failure is almost inevitable. It's a rite of passage. Passing the exams becomes an obsession. According to urban myth, there is someone who took CFA Level III 14 times before he passed and became a Charterholder. You could do the same - if you're prepared to give up 4,800 hours of your existence.

One Charterholder (who passed all three exams first time, admittedly), says failing is actually an advantage in life. "If you re-do the exam after a faill it gives you a good foundation and a broader skill set. This helps in a structurally changing environment like finance."

You fail the CFA exams if you're sleep-deprived

If you repeatedly restrict your sleep to between, '3 and 6 hours in bed', you will suffer a 'decrease in cognitive speed/accuracy' and reduced working memory. None of this happens if you spend at least eight hours in bed every night.

As ever, there are exceptions. "I actually passed level 2 after getting only 3 hours of sleep. I just couldn’t sleep. Adrenaline carried me," says one CFA exam taker.

You have to want to pass the CFA exams. You have to feel they're worth it. The bad news is that Level I is becoming a necessary condition for some finance roles, but this doesn't mean it's sufficient. "So many people exert themselves for the CFA, but sales and trading headcount is going to be falling over the next decade and I'm not going anywhere," says one veteran trader.

If you're going to spend 300 hours of your life studying and you're going to be working 50 hours a week, you're not going to see your significant other much. You'd better hope they're ok with this. Ideally, you want the sort of partner who says things like this, "My boyfriend passed with >70% all sections. We both stayed up all night before and he was 99% sure he failed. I actually cried tears of joy upon hearing the news. Congrats to everyone!!!" Unfortunately, that may be asking too much.

Photo by Bima Rahmanda on Unsplash